Vacation Rentals with Hot Tubs: Getting Ready in Westhampton, NY

New York’s famous ‘Hamptons’ and other Long Island playgrounds are opening to vacationers. Beachfront and pool-side homes as well as local businesses are hectically getting ready for the onslaught of summer visitors.

One Westhampton couple when preparing for the summer rush purchased a home to operate as a rental until they retire. The home can accommodate about 20 visitors, boasts delightful beach views from its porch, and has a graceful concrete pool and new Cambridge patio.

“What was missing in their minds,” says Best Hot Tubs’ Bill Renter, “was a hot tub — and one sufficiently large to accommodate a group of vacationers. Not only that, they wanted the hot tub to be set in the ground and appear to be connected and operating in conjunction with the existing pool.” 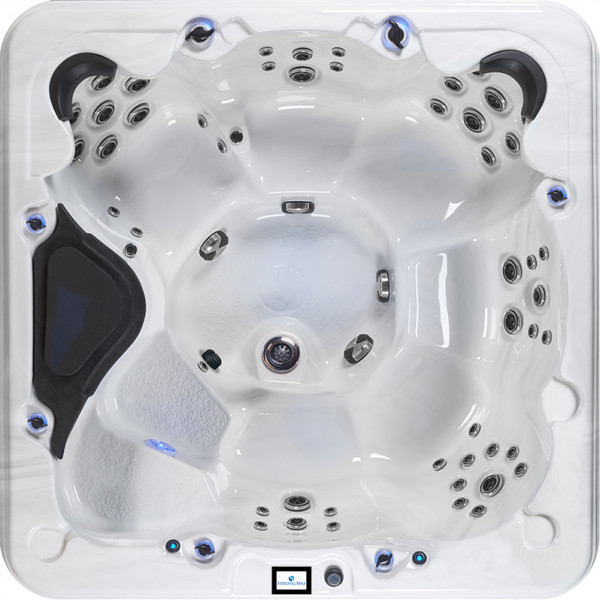 Strong Spa: Seats 7: No matter your height or preferred seat depth, our team can help you find the right spa that is ideal for you. 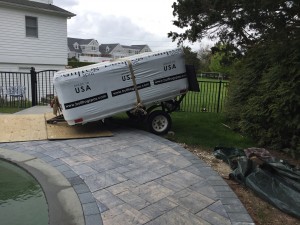 “Best Hot Tubs has great equipment to deliver spas,” adds Bill. “But even I worried a little about the sheer size and weight of this model. But everything worked just great. Our spa dolly got us to the yard.

From there we used PVC pipes and set the hot tub on them so it could slide easily across the new Cambridge patio and into its vault location without disrupting anything.”

The homeowners had given Bill a photo of how they wanted the custom installation to look.

“With this in hand I could work with Manorville-based Lupco Site Developers, the firm hired by the homeowners to do all the construction work.” 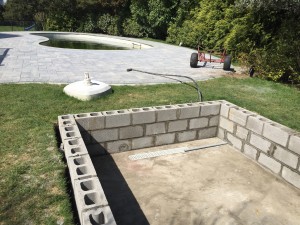 A spa vault, says Bill, must be installed in such a way as to appear in-ground but also allow access for service technicians to get inside it for future maintenance. The vault was made of concrete blocks to coordinate with the pool. The base has 6” of crushed stone with concrete poured over it.

Vaults can be individually designed, depending on taste and style. The homeowner’s plan called for two sets of wrap-around steps, fitted on two sides of the spa, one set facing the pool and the set facing the house.

“This was a great idea. “It appears completely set in-ground from those two vantage points.”

Bill adds that he drew some sketches to help the homeowners and their contractor understand how a hot tub and vault work together.

“Today’s blog shows us the early stages of this project before the pool was ‘opened,’ etc. and before the hot tub was put in the vault with the steps. We’re looking forward to sharing photos of the finished job in the near future once we have them. We’re sure it’s going to look amazing.”

Whether you set your spa in a vault or just place it on the ground, your portable spa is a vacation in itself.