A couple who hail from the bucolic neighborhood Hastings-On-Hudson, NY, had long been wanting a particular backyard water feature — a hot tub. But they hadn’t decided where to position it on their property.

Then an answer, you might say, one day just dropped o them.

“In our backyard patio area we had an English-style garden, stone walls with plantings, a garage, and a big — almost 150-year-old, oak tree,” says the husband.

“We never considered putting a hot tub there for lack of available space. But in March of 2018, during a heavy storm, the tree fell. We were lucky it didn’t fall toward the house, but it did destroy our two-car-garage, about a third of our patio, and half of a wall.” 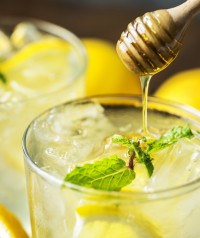 Making Lemonade Out of Lemons

Instead of rebuilding the garage etc. right away, however, after clearing away all the debris, the homeowners thought: Hey, let’s make lemonade out of this lemon: Let’s get that hot tub now.

Method to their Gladness

The couple had decided on a portable spa, says the husband, because permanent hot tubs/spas are taxed in their area like swimming pools. By choosing a “vault system” for a portable spa, which the hot tub sits in, it would look custom but wouldn’t be considered a permanent installation.

Plans were then developed, with help from an architectural designer, to rebuild the garage in a way left room for the hot tub and a new outdoor kitchen.

“The tree stood where the grill is now,” the husband adds. “One of the toughest things was my wife spent so much time searching for granite stones that matched the old ones. After finding a supplier, she had to hand-pick each one from piles of stone.” 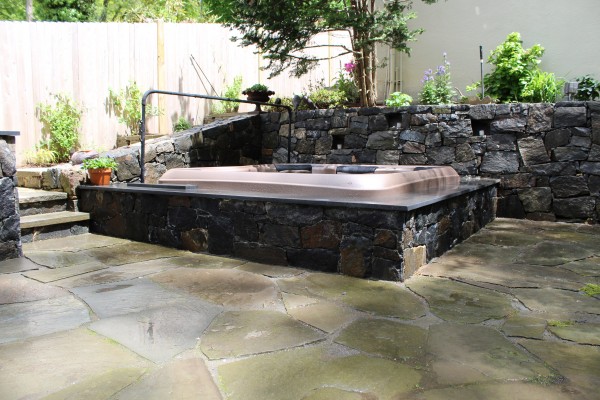 Stone for the walls, outdoor kitchen and hot tub facades were chosen by the wife who also asked that niches be left in the wall behind the hot tub to hold mood-setting candles.

When it came to choosing which hot tub they would buy, the wife contacted Bill Renter of Best Hot Tubs whom she had met at a prior Architectural Digest Design Show in New York City.

“She loved that the Bullfrog Spas Bill had showed her had fewer parts and were energy efficient,” adds her husband. “She had already also gone to a local spa dealer who had a salt water tub which we were interested in. But in speaking with Bill again by phone, she thought it was worth visiting their Westbury, Long Island showroom and look at the Bullfrog Spas again.”

The hot tub installation design closed in the spa only on 3 sides, leaving one side open for repair work. It’s also where the hot tub cover fits onto the spa.

“We recently did a service call for them,” says Bill Renter. “The unenclosed area made it easy to open the control panel and check on the problem they were having. It turned out, in this case, not to be an issue with the hot tub at all. But I was able to diagnose the problem. They had an electricity issue and I recommended a particular switch the electrician could put in. I’m glad I was able to solve the issue for their electrician.”

The homeowner adds he’s happy with the “really cool features” of her spa. “That’s what helped us make our decision. In fact, we were in it just last night.”

The stone-faced vault design the couple chose not only is in keeping with the stone walls so common to their area of Westchester, NY, but the width of the vault’s edging allows plenty of room for resting snacks and drinks carried to the spa from the outdoor kitchen  — yes, including glasses of lemonade.